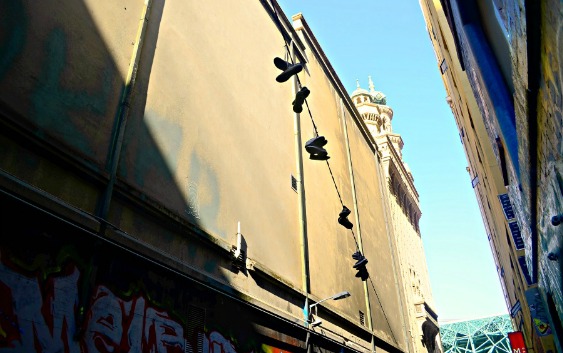 Nothing quite says success like living in your childhood bedroom.

Going to sleep every night with the soft green light of glow-in-the-dark stars on the ceiling really does something to your sense of accomplishment.

I remember putting that collection of stars up when I was around 12. Annoyingly, the pattern is unfinished and only covers one-quarter of the area.

It annoys me that there are glow-in-the-dark stars in the room but it annoys me even more that they haven’t been put on properly.

The bed has a floral doona cover thrown over the top of it and the wardrobe is filled with knick-knacks a family of four accumulates over some 20-something years.

My lace underwear shares a shelf with my old toys in the cupboard.

I’m a grown woman living in a childhood bedroom, where sex doesn’t exist yet and boys aren’t allowed.

It’s me, mum, dad and the sausage dog, and my co-habitation situation doesn’t exactly scream “I’m an adult who’s got it together”.

I’ve tried lying about my living situation. I’ve told people that I actually live in the city, in an apartment overlooking the river, the one I rented in my past life – the one I move out of to follow a dream and travel the world.

I’ve told people that I live in a share house with a “lovely couple” which isn’t technically a lie, really. I’ve told people I’m just house sitting or looking for an apartment.

I’ve lived out of home before, though, don’t get me wrong. I’ve travelled. I’m cultured. I’ve seen sights and made pilgrimages. I haven’t always lived with my parents in Brisbane’s outer suburbs.

I’ve backpacked across the world and lived in obscure cities, learned languages and mingled with shaman in jungles. I’ve accomplished goals and stuck it to the man by living out of a bag.

I’ve even had the odd well-paying job. I’ve worked nine-to-five, been a commuter in the rat race, looking for a life, a lifestyle.

I even began making that regular detour from the office to home, stopping in at the bottle shop for a drop to drink, trying not to stare at the girl who served me.

She had bright turquoise hair and eyebrows to match.

I don’t say anything, but we both know I’m thinking about her eyebrows when she asks me how I am.

I’ve worn uncomfortable shoes and pin-striped skirts. I’ve dressed in all black for days in a row, and caught the train to work with other people who look equally dissatisfied in their boring work attire, their boring work life.

Then there’s that one person, you know the one, with a leather satchel and thick-rimmed glasses, a great hairstyle and shoes that look like they’ve walked in some seriously cool places.

I want to be you, I found myself thinking, rolling my eyes and groaning at my current situation, at the ugly shoes I’m wearing, the skirt I bought from Target.

I want not to be bored and on autopilot.

I want to be like that women I saw on Antiques Roadshow that time, who had been an adventurer and had done research in Antarctica and had gotten herself stuck with frostbite and had to cut off her own finger.

I want to do that, I find myself thinking, looking around the depressed train carriage.

Without the amputating, of course.

But then, at the end of it all, I’ve ended up in my childhood bedroom, again. Glow-in-the-dark stars, memories of slumber parties, childhood dolls in cupboards, and all. All memories stashed away on the same shelf as my sexy lace undies.

“You’re a winner, Sarah,” dad once said at the dinner table after I revealed a $7 prize on my crossword scratchie.

I’m a winner. I go over those words in my head.

I hadn’t realised my life, my lifestyle, would bring me right back to the place I was trying to distance myself from.

I was running away from my small town life in the southern suburbs of Brisbane. But the people, my family, have made it a pleasure to return, reminding me of the love I’m surrounded by.

A friend of mine, who lives in Sydney, once referred to the city as a village. “After a while you go anywhere and see the same people.”

Is she sick of running into high school friends at Coles, too? Maybe.