Getting lost in the desert in La Guajira, Colombia

The last couple of days I’ve been in La Guajira, one of the 32 departments of Colombia. This department is on the Caribbean coast and it’s beautiful with the most northern point of South America, Punta Gallina. There are beautiful beaches in Cabo de la Vela and around a desert filled with cactuses, rocks and sand. And this place is bloody hot. I love it!

From Santa Marta I left way too late to Riohacha (2.5 hours) to get into a shared van (cooperativa) to Quatro vias and then a jeep to Cabo de la Vela. I was so lucky after Riohacha. The people wait until the cars are filled up, but I didn’t have to wait any longer than 15 minutes to go to the next place. (An Israeli couple was waiting two hours for the last jeep). From 9.30 to 16.30 I was on the road. The last part in the jeep was a very bumpy ride, I had my hopes up when I saw a part of the road was asphalt but soon I realized it was only about 200 meters. But it’s part of the experience.

At Cabo de la Vela I stayed at Kite Addict, not to do any Kite Surfing (not a good plan with my hernia, it was still recovering from the bumpy jeep ride) but to spend the nights in the big hammocks they call chinchorro, sleep under the bright beautiful stars. The people there are so friendly with always many people (kite instructors, other staff and tourist) and they love to explain cultural differences. I had a very nice time with the people running the place there.

The first day I went to spots around Cabo de la Vela: Playa del Pilon, Pilon de Azucar and La virgin de Fatima. Rent a motorbike and go around, or if you enjoy walking a lot and bring enough water and sunscreen with you, you can also walk, that’s what the Italian guy I met did. He is also vegetarian so we tried to find a vegetarian place and we were recommended a French restaurant. I was wondering if I should support a French restaurant in the poorest department of Colombia. Really? well hell yes! And here’s why… these two French guys:

So everyone wins! I only forgot the name of the place, so it you are in or are going to Cabo, EAT WITH THOSE FRENCH GUYS! It’s called Hemet’s.

The next day we left for Punta Gallina, the most Northern Point of Colombia, and of South America! After a couple of hours with too many people in a jeep, a driver who was maybe practicing for the Dakar race since he was just going as fast as possible but with some short breaks: we saw black flamingos, ate palitos de queso (cheese sticks) and after 15 minutes boat ride we arrived at a beautiful place where we had lunch, dinner and slept. They also arranged the tour to Punta Gallina, a beautiful lookout point and Playa Taroa, with their golden dunes and a nice refreshing swim in the ocean. It was the perfect time to catch up with my reading and some relaxing.

The final day we left and the driver was an old guy, he was an indigenous guy and could tell a lot about the culture, about history and the people. He was stopping for everyone who was trying to stop the cars to give food, water, money. Some drivers just horn until they open the roads. Most of the time children do this job of asking for tolls, sometimes you have to pay four times within 200 meters….

This toll point is usually just a rope with some fabric hanging over it. Sometimes they actually maintain the roads for the toll, sometimes they don’t.

That day I was supposed to visit the project of the French guys and I was soooo looking forward to it. But unlike I was told before, that we would be in time before 11.00 to see the project, it seemed impossible. It was 13.30 and I also needed to go to Santa Marta. So I went straight to Santa Marta. Very sad, since those guys were expecting us to visit. To Santa Marta it was quite a ride being checked three times by police having the bus broken down once and I didn’t make it before 7pm (and my dad, who was waiting in Santa Marta, was sooo worried).

I was lost in the desert for three nights and four days. It was beautiful time!

For people going there:

This piece was originally published by Sabine Bouwmeester on footprintsatw.wordpress.com and was republished with permission. 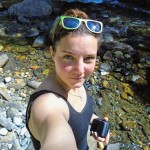 Sabine Bouwmeester has been travelling on and off for 10 years but in January 2017 she became a full-time traveller. With a background of social work and cultural interest she shares her observations and experiences  on her blog www.footprintsatw.wordpress.com.