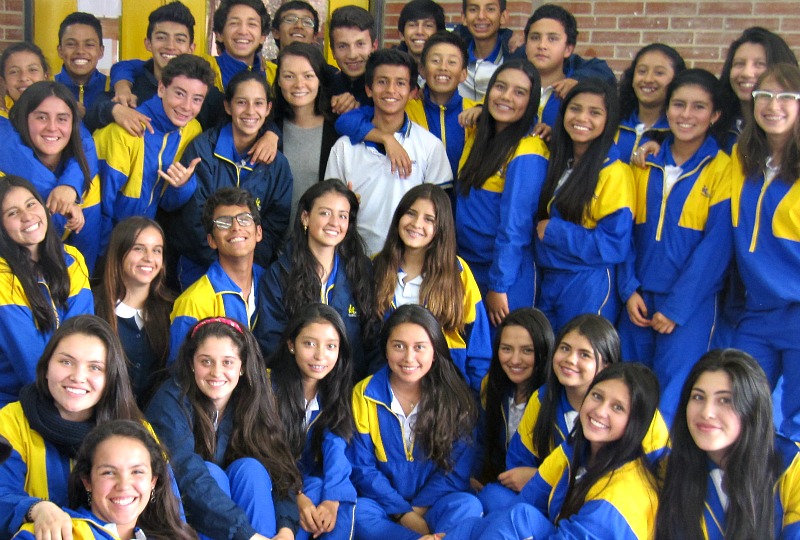 I’d like to share with any prospective English teachers out there, my first impressions so far on teaching English in Colombia! The following could be true for other countries around the world, but I am sure the Colombian culture has got something to do with most of these!

First, some background information about me. I’ve been teaching English at a private school here in Bogotá, Colombia, for the past three months. I’m a “co-teacher”, meaning that there is a teacher in the classroom with me the whole time, and we are meant to be working together to run the class.

I see all of the year 9, 10 and 11 students, so that’s 17 classes! I see each of those classes just once a week, which is 45 minutes. So, I am definitely not a teacher in the students’ eyes. More like a fun visitor.

On top of the classes, I do “coaching”, which means one-on-one sessions with the English teachers, answering any questions they have, having general conversations or focusing on a particular grammar point they want to go over. Basically, anything they want! There’s 17 English teachers in total at the school, but I only coach 10 of them at the moment. Again, just once a week for 45 minutes.

So, here are my top first impressions about teaching English in a Colombian school!

1. Organisation of the people

I was hired in January through a recruitment company via Skype, and I was due to start teaching at the school at the end of March. We had one week of induction with the organisation that hired me right before starting, and on the Thursday of that week, the English manager of the school came to speak to us. He said, “Welcome to Colombia, and see you at school on Monday!” So, what do I do? I go to school on Monday, all excited to start, when that same English manager says to me, “Oh, what are you doing here today?” Apparently the contract between my organisation and the school hadn’t been signed yet! So I turned around, went home and waited for another two weeks until the contract was signed…

This is especially true between managers and the people below. Important messages just don’t filter through! So, firstly, as per the first example, there was no communication that the contract hadn’t been signed yet. And on that first day, the English co-ordinator was going to meet me in the morning. Luckily I had emailed her previously saying, “See you at 7am on Monday! Looking forward to meeting you!” because if I hadn’t have done that, she wouldn’t have met me! No one had told her that I was starting! Then once I actually started, seeing as they hadn’t organised a timetable for me yet, she said that I would spend the whole day with this one particular teacher. When I saw him in the morning, he had no idea about it. And this wasn’t even the first year that they had had someone like me in the school.

3. If you want something, make it happen for yourself

This applies to both big and small things. Seeing as I was new at the school, I needed small things like a locker key, whiteboard markers and a key to the teacher’s bathroom. The co-ordinator had promised me on the first day that she would find those for me. I don’t know why I believed her. I was waiting for weeks! Finally I started talking and asking several different people, to make sure the answers were really correct… And I went to each individual person who was in charge, chased them up many times, and followed them to their offices to get the items. The bathroom key was a big one… because in this school, each teacher’s bathroom has a different key. And because I drink a LOT of water, I kept needing to run to the front of the school to the admin building to go to the bathroom, and run back to class. Very annoying. Another thing was that I had to request for vegan lunches, which wasn’t easy! The first day, the principal said that it wasn’t a problem and that he would talk with the ladies in the cafeteria. But did he? No. So I went chasing around, trying to find the correct person in charge, who of course was only at school once a week, get her to sign a form, then take it to the NURSE, and blah blah….. It was a process, I can tell you that!

Even though the teachers themselves may not be organised, they expect the foreigner in the room to have everything in order and know what the hell is going on. On my first week, without even having discussed with the teacher, he asked me “Do you have an activity for the kids?” right as I stepped into the classroom. This was before I had met the students, so I didn’t know their English level, what they had learnt in the past, the dynamic of the kids… NOTHING!! So I don’t know if he expected me to have like 10 options up my sleeve and pull out whichever one would have suited in that situation…

Every Colombian school has a break called “merienda”, and they are given a snack at this time. I know this is the culture, because this is what they eat at home, but it is never anything the slightest bit healthy. It’s always something to drink and something to eat. So to drink, it could be sweet drinking yoghurt, a sweet artificial juice, jelly, ice cream. To eat, there’s cakes, cookies, wafers, salted crackers, “bocadillo” (Colombian Jam), hot dog, ham and cheese bun, empanadas. You see what I mean? And no fruit. Only at lunch. So I asked someone who decides what to serve the students, and they said that there is a nutritionist at the school who calculates how many calories is required….. A NUTRITIONIST?!?! I would really like to have a sit down conversation with them.

This school is one of the few that serves lunch to the whole school. It’s not too different to the “regular” Colombian meal, so it’s rice, packed with salt and oil, fried potatoes or plantains, fried meat or sausages with a salty salad. Kids can even request for no salad as well! Oh, and a piece of fruit! Bravo!

This to me is a real positive. The students and teachers are almost like friends! They joke around, they give each other handshakes, sometimes hugs and kisses on the cheek! So it’s an advantage in the classroom, because the students still respect the teachers. Of course this doesn’t apply to every single person, because I have also heard a student say as a joke to a teacher “I hate you!!!!!”

Kids sometimes just do not listen in class! Some students just stand up in the middle of the class while the teacher is explaining something at the front, to go to the other side of the room to talk to their friend. Or, to put something in the bin. Or, even worse, they stay in their seats, but yell out to their friend on the other side of the room about nothing in particular. Sometimes it’s so noisy that it takes a really long time to even get the class started.

University fairs, student performances, class meetings, organisations coming to talk to the students, special celebrations, practicing dance, etc. One of the great things about Colombian schools is that they teach dance to all students as a subject, which I think is AMAZING! For that reason, they put on a performance for any kind of special day that comes up, which is great! At the cost of missing classes, usually these events are on Fridays. So, for example, there’s one Friday class that I saw only once in two months!

Last tip… EXPECT ANYTHING!! Take things as it comes. Be relaxed. Go with the flow. And listen, listen, listen. Understand that it could be a cultural difference, so don’t go try making changes too quickly!

What do you think about Anna’s observations? Have you been teaching English in Colombia, too, and want to share your experiences? Let us know in the comments section below.