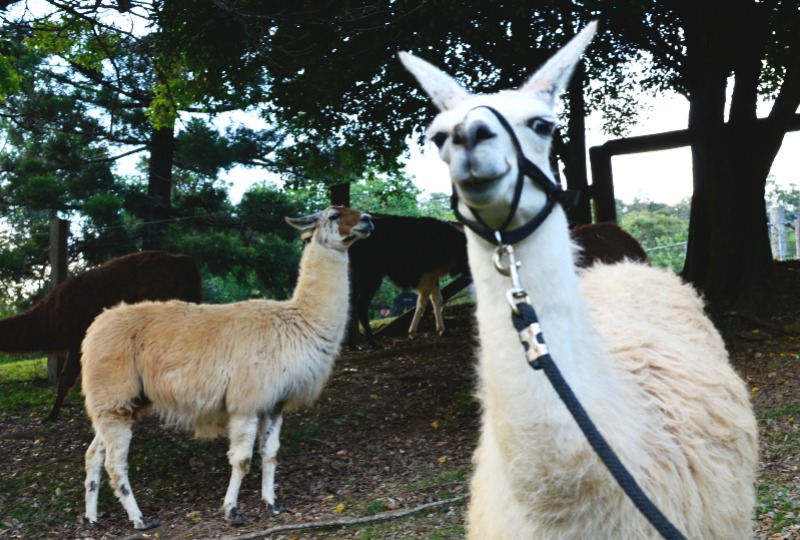 It’s not every day that you stroll down the road and get the opportunity to meet a pack of Llamas. It’s even less likely if you find yourself far from the Andes in Colombia or Peru, but rather in the hills surrounding the north of Brisbane in Australia. But over the last weekend, that is exactly what I got up to.

Over the recent public holiday my partner and I decided to plan a relaxing weekend away in the hills of Dayboro. In the lead up to the trip, while running errands and doing some last-minute grocery shopping, I was asked by shop clerks and the woman I bought some veggies from: “So, where are you heading for the long weekend?” and each and every time I said “Dayboro!” I was met with a polite smile, a confused squint of the eyes and a question: “Where’s that?”

More: How to save for overseas travel

Dayboro is about a 50-minute drive north of Brisbane and is a small (I’m talking one main street) country town. The main attractions in the town include the local pub at The Crown Hotel, the Dayboro Art Gallery, which is run by a group of volunteer artists, the Dayboro Antiques Shed, Rendezvous Cafe, a lovely bookshop cafe where we spent a good amount of time drinking tea and reading books, the old sawmill at the Gantry, a few wineries and many great walking and hiking tracks. 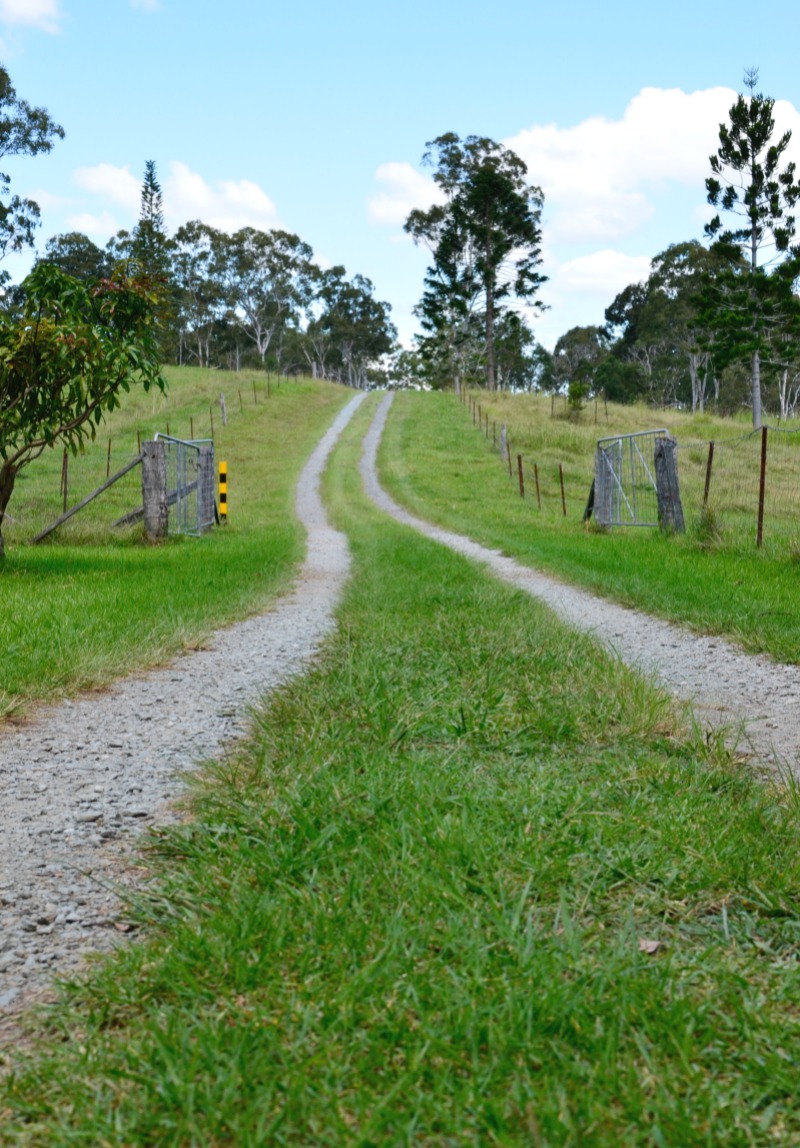 A country road in Dayboro 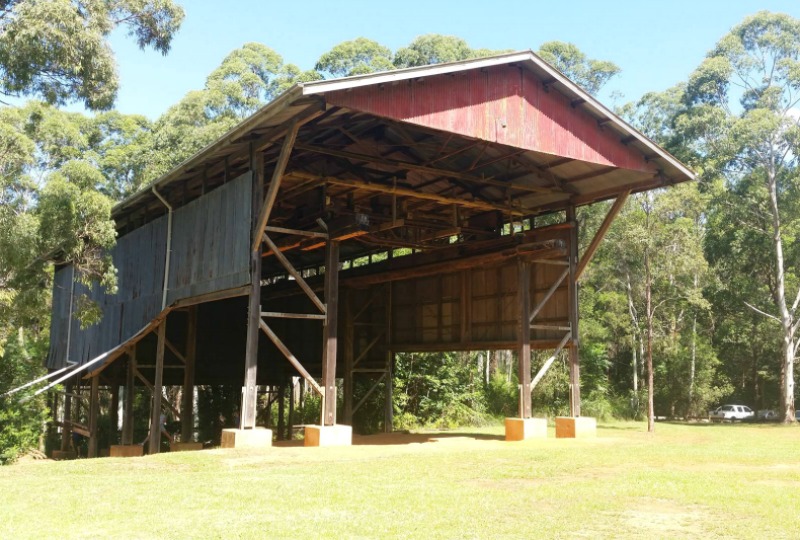 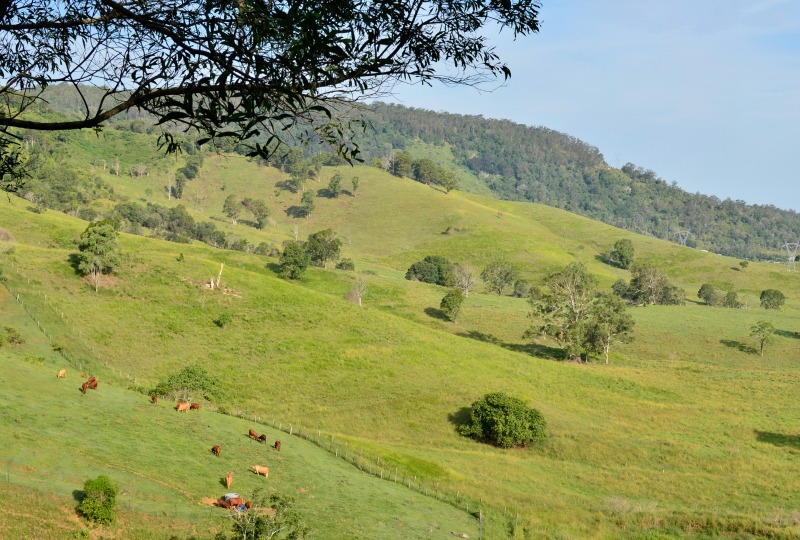 The rolling hills of Dayboro 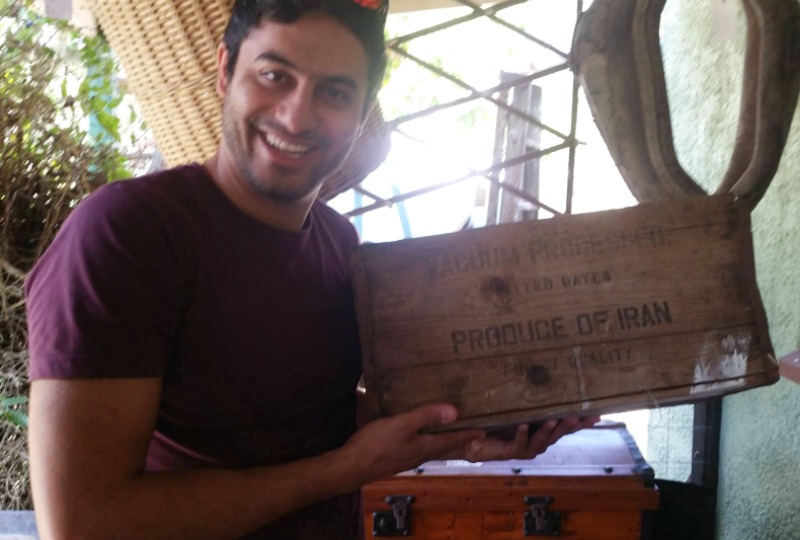 Rummaging through the local antique centre

But we were here for the llamas! Yes, the llamas. After a quick search for places to stay online I found Dayboro Cottages and Llama Walks – a small cluster of self-contained cottages overlooking rolling green hills, cattle and llamas. About 10 of them. 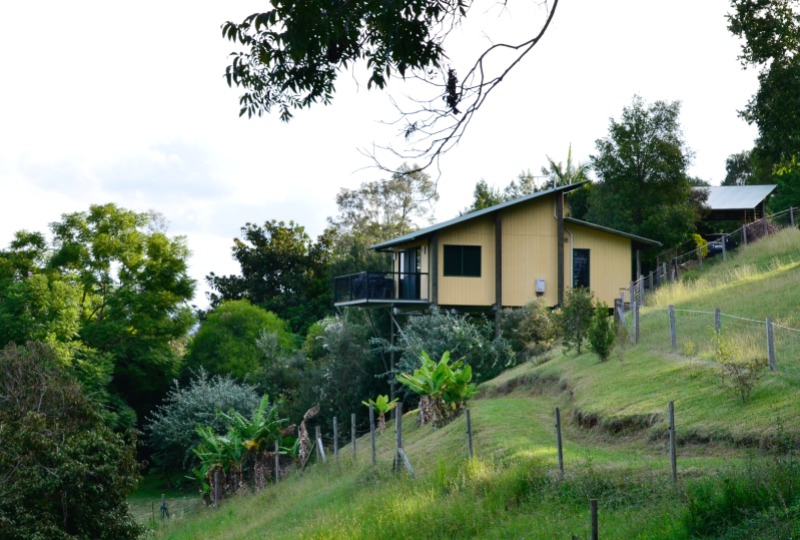 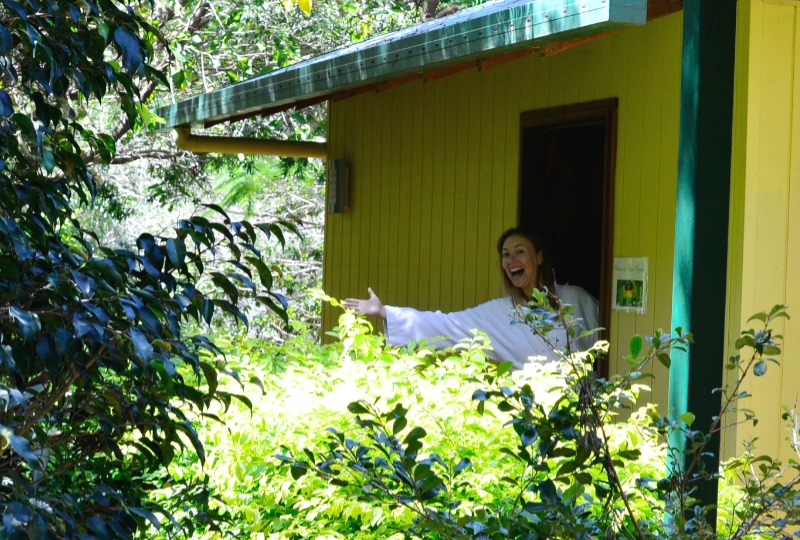 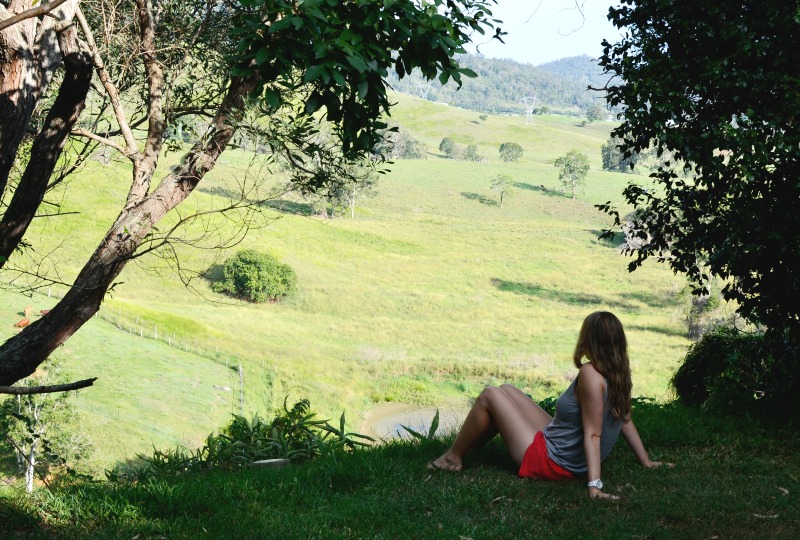 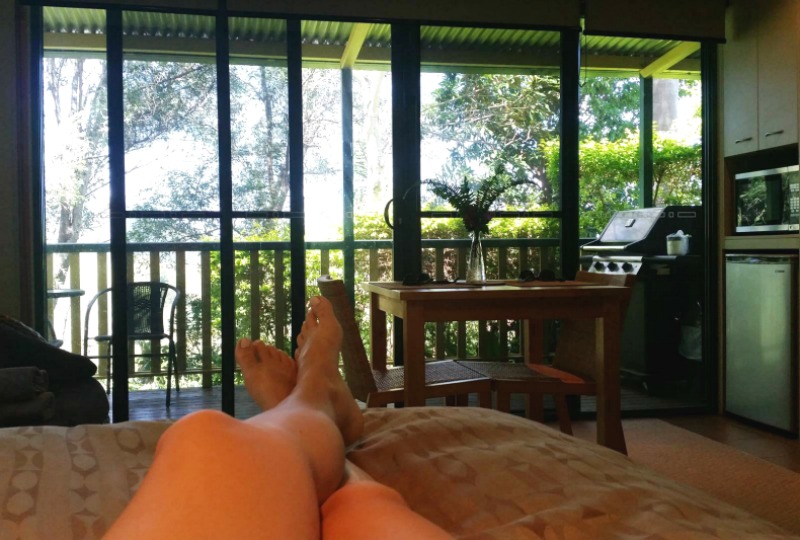 Enjoying the perks of cottage living

Llamas are part of the camel family, but if you look at their faces you’d swear they were part kangaroo. And each month the good people from the Dayboro Cottages and Llama Walks host walks with the llamas (as the name suggests!) and their guests, taking everyone out for a leisurely stroll through the surrounding hillside. A walk wasn’t scheduled on the day of our visit, but our hosts were wonderful enough to invite us to meet them and give them a pat anyway. 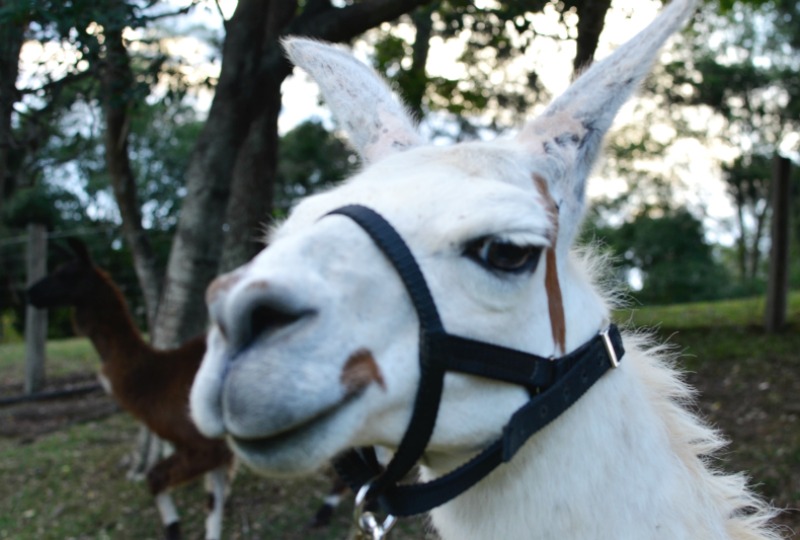 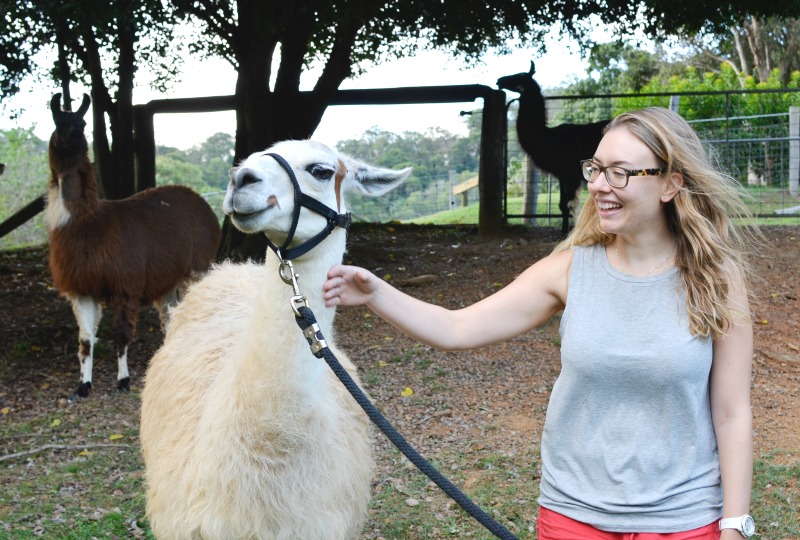 Getting acquainted with D’artagnan 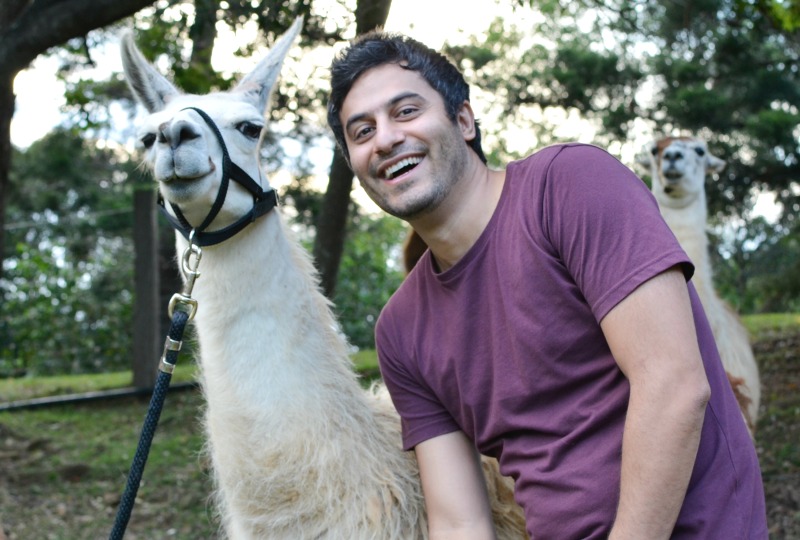 These two were fast friends 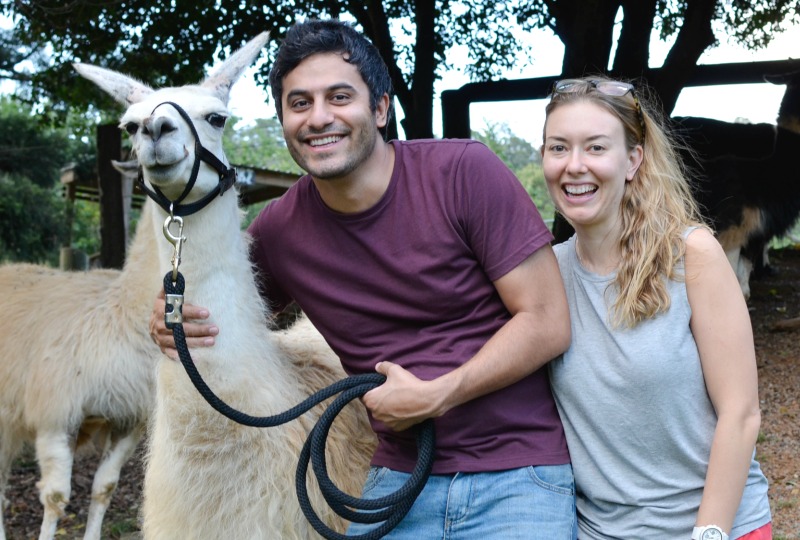 Happy snap with the llamas 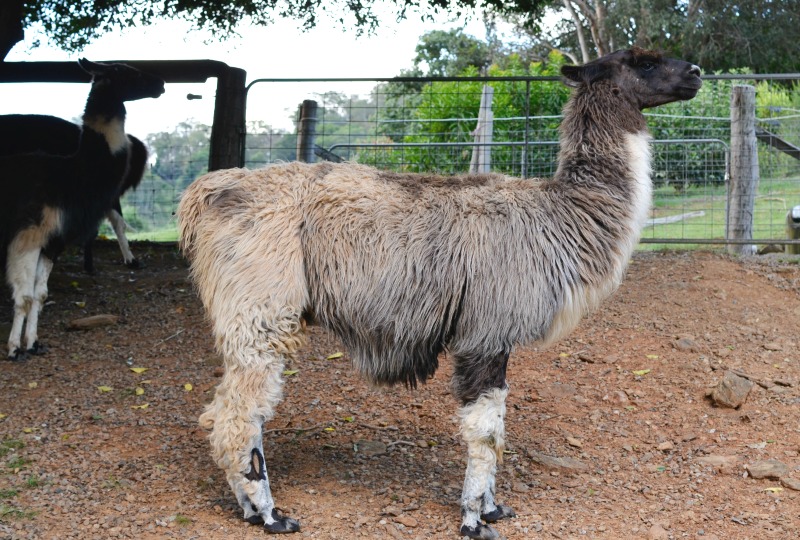 Llamas are said to be very social, intelligent and well-mannered animals, and watching as one of them was trying to escape a harness being pulled over his face, he reminded me so much of our dog, Pickles, who also hates having the leash put on him and loves to make a bit of a game of the whole thing. According to the fountain of knowledge that is Wikipedia, Llamas are native to North America but they then migrated south some 3 million years ago. After the ice age they died off in the north and thrived in the south.

The Moche people of pre-columbian Peru were known to depict llamas in their pottery and ceramics and llama figures were even buried with their dead and thought to carry them to the afterlife.

The first real attempt to farm llamas in Australia came from a gentleman named Charles Ledger way back in 1853. Even though there was a ban on llama exports imposed by the Peruvian government, Leger drove a group of 600 llamas and alpacas over the border to Bolivia. He then drove them into Argentina and then through the Andes mountains into Chile. The surviving 336 were then shipped to Australia, although only 276 made it to Sydney. Unfortunately for Ledger, someone had beat him to it. By time Ledger returned there were already 10 llamas in Sydney and old news.

Nevertheless, the government purchased the herd, which had grown to 417 in 1861, but a around half of them eventually died because of drought and illness. Admittedly, not a great start for these poor animals.

Now there are thousands of llamas in Australia and they’re used for a whole variety of reasons: their fiber is used in textiles, they’re kept as pets, used as therapy animals and, yes, even as the star attraction and walking mates at bed and breakfasts in Dayboro. 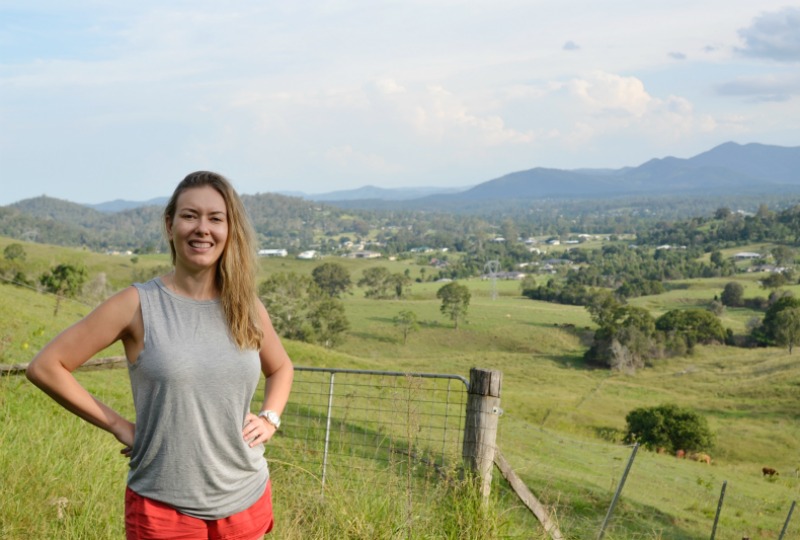 For more information about the Dayboro Cottages and Llama Walks click on the link. Have a question? Share it with me in the comment section below.

About Dayboro Cottages and Llama Walks:

Price: I bought two nights accommodation online which ended up costing $150AU each night, which I thought was a great deal. We stayed in the small cottage at the bottom of property which was quiet, private and the perfect place to charge the batteries.

Facilities: We had a private balcony with a barbecue to do our cooking, there was also a kitchen with a fridge and small cooking facilities in the room. We had air conditioning, a television and there was a book and DVD library in the reception area if you’re looking for some entertainment.

Location: The property is just a five minute drive from the centre of town, a further 15 minutes or so to the next biggest town Samford.

Service: We experience really great service at the Dayboro Cottages and Llama Walks, even though things didn’t begin smoothly. Unfortunately our hosts hadn’t received our booking and had overbooked. But they were so great about it all, were incredibly apologetic and gave us a night for free as an apology. Thank you very much!

Pin this post about Dayboro Cottages and Llama Walks for later! 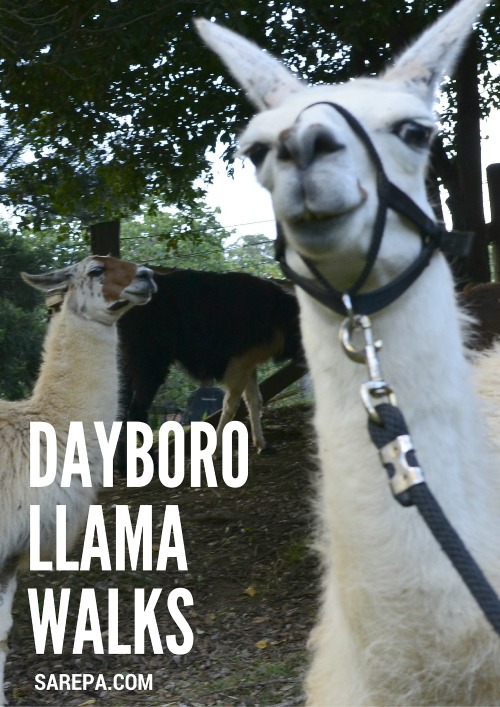 Dayboro Cottages and Llama WalksllamasLlamas in Australia
by Sarepa
3 Comments