Travel Colombia: 7 Misconceptions about Colombia that I’m tired of explaining by Andrea Jaramillo 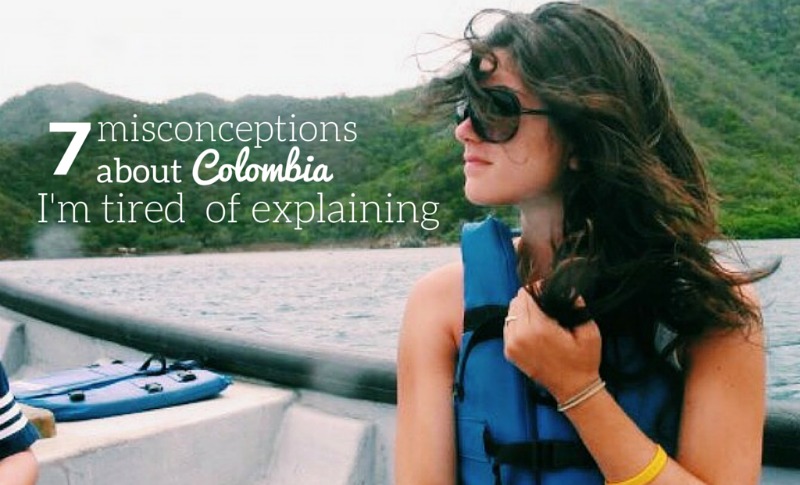 For those of us who have travelled to Colombia, or are planning a trip to the country, there’s little doubt in my mind that you’ve faced some pretty interesting questions and comments. Today Andrea Jaramillo from Red Wine and Lipstick shares some of the misconceptions about Colombia she’s faced and why she’s tired of explaining them.

1. “Why does Siri say it’s 59 degrees (15 degrees Celsius) and raining in Bogota!? Isn’t it summer? I thought Colombia was a HOT country!?”

If you travel Colombia, yes you are going to a “HOT country”. However, Bogotá is a city, not a country. And while the climate varies remarkably throughout the beautiful country of Colombia, Bogotá rests 8000 ft. above sea level. The higher a place is, the cooler it is. It is also just north of the equator, which means the weather patterns are all over the place and a stagnant seasonless climate occurs. 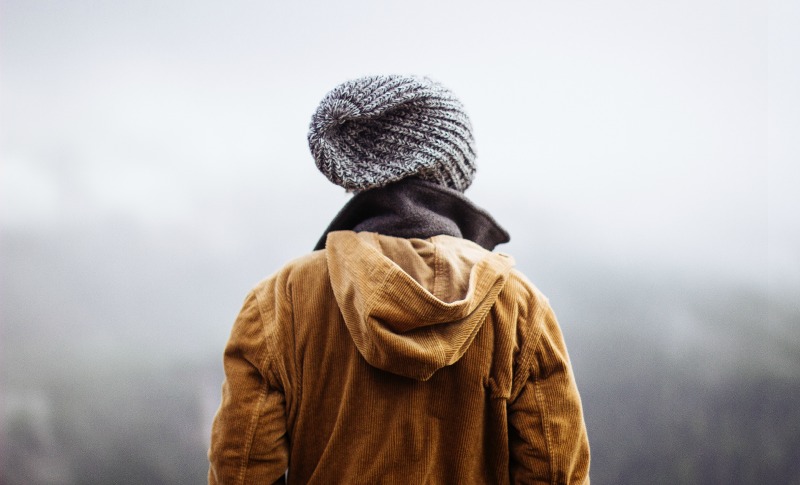 Another thing: Any filmmaker who bases their film in “rural, jungle, palm tree-covered Bogotá” should be banned from cinematography for lack of basic research. It takes one Google image search to see what the city is all about. I’ll even make it easy for you: think of a sprawling NYC or Chicago nestled in the mountains.

Here’s a tip: Bring a jacket. And, for the love of god, please don’t try to wear shorts in Bogota!

2. “Dayum, is the blow (cocaine) like really amazing or whaaaaaat?” 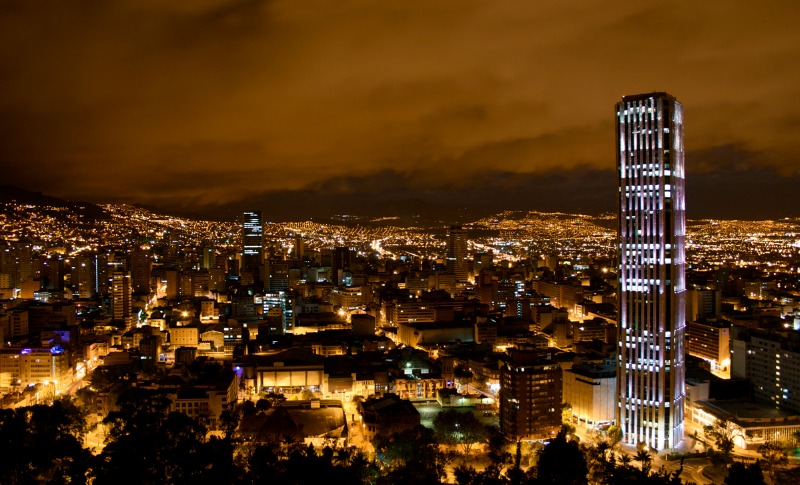 Bogotá (and Colombia, for that matter) is not a drug city, despite what history may have you believe. The people do not lock themselves in their offices at 1pm scarfacing a mountain of coke. Bumps of cocaine are not found on everyone’s keys and most people don’t have hook ups on speed dial.

Sure, like every major city with nightlife, you will find select party-goers indulging themselves in certain recreations in nightclub bathrooms and dance floors much like you would in LA or London, or any other big city. That doesn’t mean it’s universally accepted here.

Cocaine is a little taboo here, but the foreigners flock to hostels in El Centro to try and score. In my honest opinion (and you know I love some good fun), cocaine is not worth the hassle it takes to get it. It’s shady and not very “fashionable”. Basically, it’s trashy.

In short: Ditch the daydreams of “doing as the locals do” because, actually, the locals don’t do that. Just drink more guaro (aguardiente). It’s more fun than cocaine.

3. “Omg you’re probably so tanned! How far away are you from the beach??” 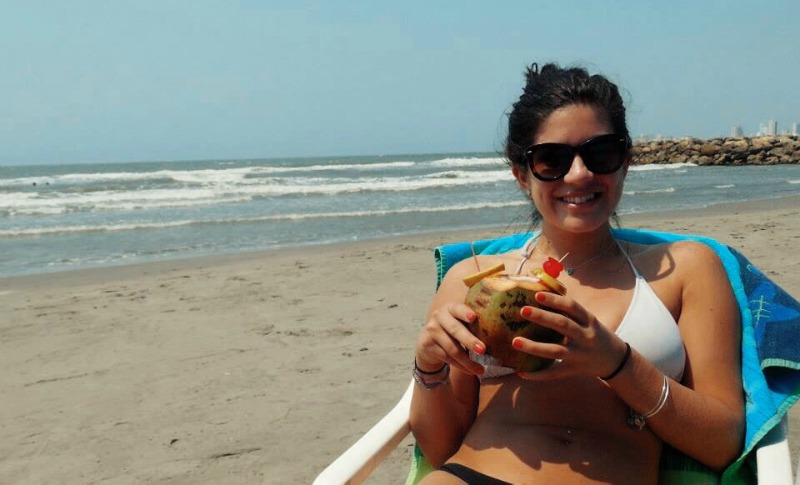 Far. I live very far away from the beach. About a 20 hour drive, actually. I am pretty tanned right now, but that’s a combination of last week’s trip to Miami and Colombia’s constant long weekends spent in tierra caliente. However, since it’s nearly always rainy here, plan de piscina (pool days) are kind of out. No bueno for my tan.

Here’s a tip: I do, however, love the la costa (Cartagena, Baranquilla, Santa Marta, Palomino,etc etc) and would gladly accompany you to the beach! It’s a short flight (about one hour) and they are fairly affordable if you buy in advance. Check out Avianca for the best deals and flight services.

In short: Bogotá weather is not conducive to bronze-ness, but Colombians have about 1-2 long weekends a month, which allows for quick escapes to the beach via plane.

4. “Do you have internet in Colombia?” 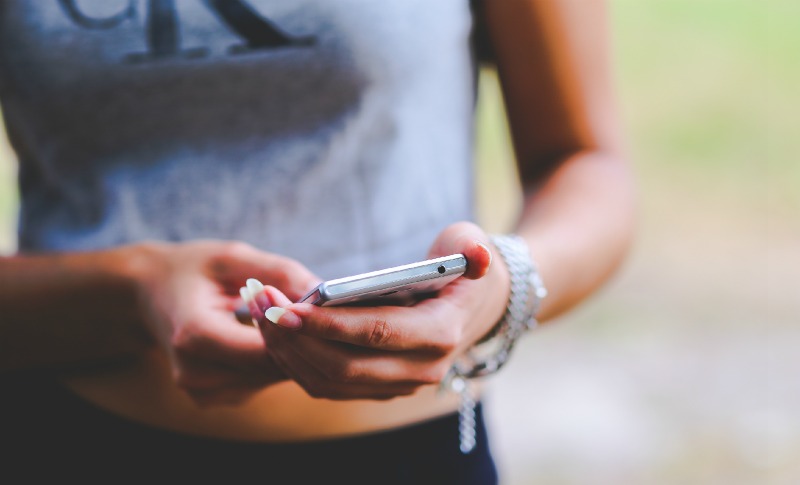 WTF. I’m not even going to get into this because it’s just dumb. The person who asked me this was actually chatting with me online.

Another hilarious one I’ve been asked: “Do they have work out classes in Colombia?” After I had just spent five minutes talking about how I love taking Zumba classes at my club’s gym.

In short: Don’t be a fucking idiot.

5. “When we stay with you, are we going to be like, sleeping in huts?” 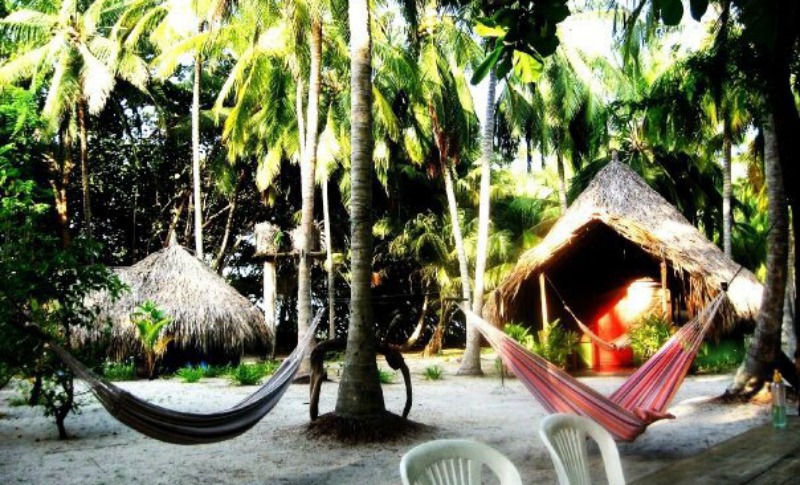 When I told people I was moving to Colombia I received a couple good-natured comments about fields and cows and other farm stuff. Much of the country is rural and many of the people who live in rural areas have a cow or a horse or a few gallinas; but there are also many major cities which are nothing like the countryside.

Bogotá, Medellín, Calí, Cartagena, Bucaramanga (to name a few) are all major modern cities with high-rise buildings, cafes, museums, private schools, parks, and corporate buildings. People take Uber and drive BMWs, Volvos and Hondas. Some enjoy fancy spa days and country clubs and macro supermarkets. They talk on cell phones and use paved roads to get around. Kids are glued to their iPads just like in the U.S. and watch cartoons on Saturdays.

Personally, I don’t live in a hut. I live in a beautiful apartment in Bogota with a view of the mountains. 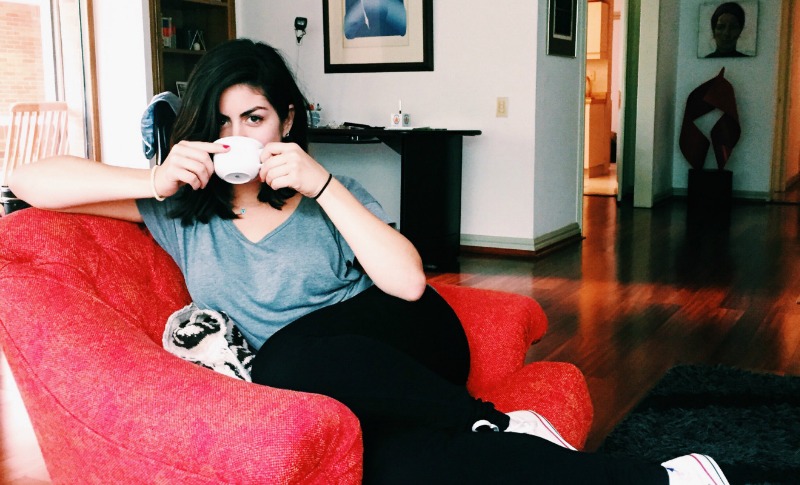 When the city folk have had enough of all this modern tech shit, they pack up for the weekend and go out into the country for a bit. You know, to get back to their roots.

In short: Like most countries, Colombia is extremely diverse. You will find everything from country living to very American-ized lifestyles. 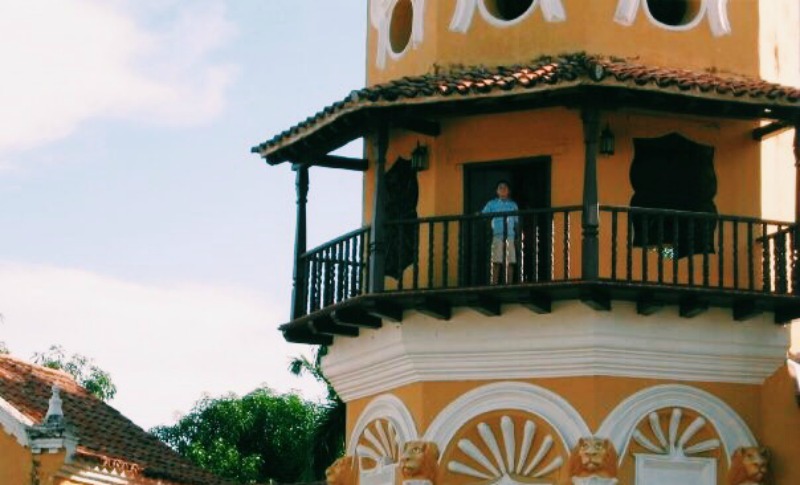 Nah, bruh. We good. Once upon a time, Colombia was dangerous. When I was six years old, I remember dropping my dad off at the airport here in Bogotá and seeing eight armed men with insane guns surrounding one man and escorting him to a waiting car. Whether I witnessed a kidnapping or an insane entourage of bodyguards, I’ll never know. Those days are (hopefully) long gone and Colombians and tourists can live and roam pretty freely around many parts of the country. 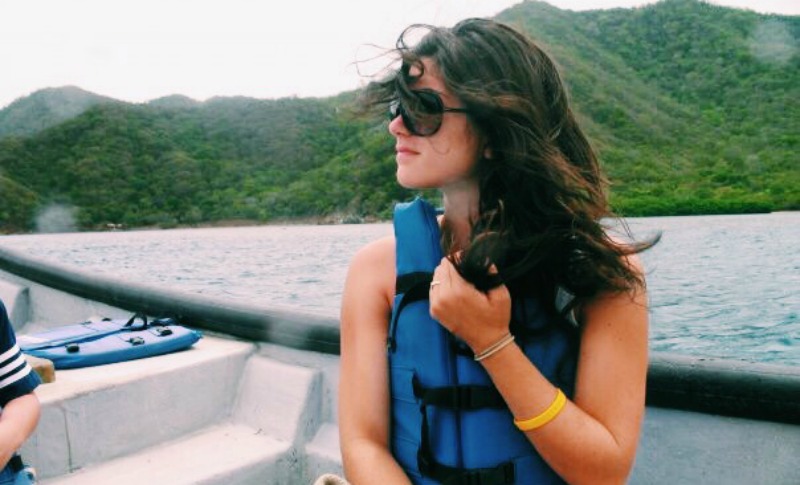 In the last 10 years I have been on more cross country road trips than I ever imagined and have seen the most beautiful places and people because of it. I’ve been to places that most Colombians have never been and never once have I felt threatened or uncomfortable while exploring them.

In short: While precautions should always be taken when traveling, I don’t believe in letting fear dictate your experience or your home. Embrace the good with the bad, the beautiful and the ugly and learn something from them.

7. “Colombians are sooooo gorgeous. I bet everyone looks like Shakira or Sofia Vergara!” 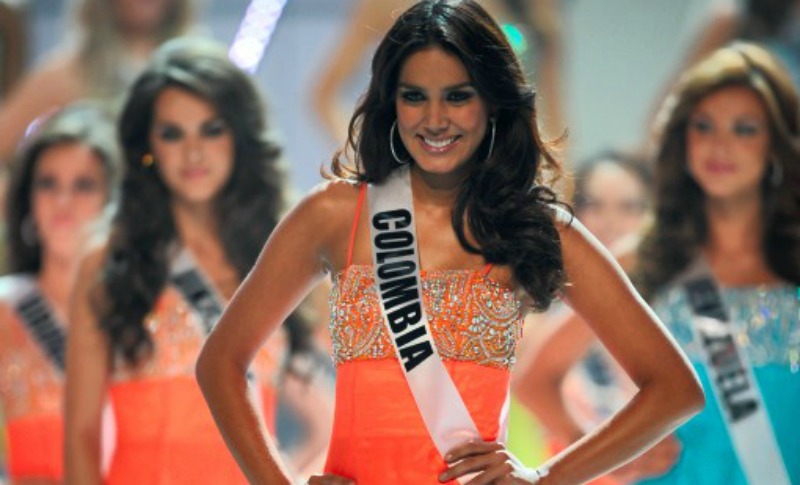 Alright this isn’t a misconception or a stereotype. This is a fact. The people here are beautiful. 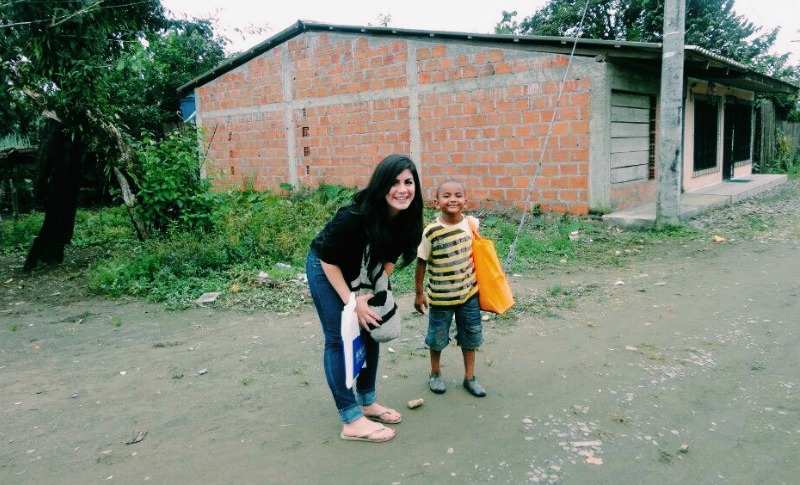 Disclaimer: This post is obviously poking fun of some of ignorance I’ve seen from people about Bogotá and Colombia, however, I understand that the media depicts a lot of “untruths”. It’s my hope that through this post, and my blog as a whole, (and maybe a quick Google search on your part) we can begin to debunk those misconceptions and people can start to see beyond the stereotypes and find all the beauty and experiences Colombia has to offer. They call this place the land of Magical Realism for a reason and I hope you won’t be afraid to come see for yourself! I say this from the heart:I love Colombia for everything that it is. From the beautiful and delicious to the scary and rough. It’s all part of what makes this new home of mine so unique. So full of character. The adventure and life experience that present itself here is once in a lifetime and I wouldn’t trade it for anything else in the world. For those of you thinking of traveling here, please come! For those who are on their way, I can’t wait to see you!

Pin this poster and save it for later! 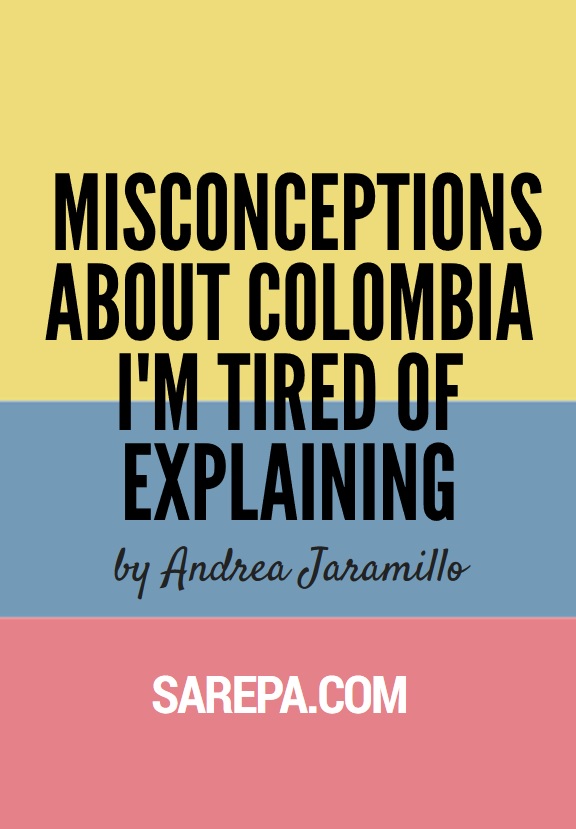 Andrea Jaramillo has her own blog Red Wine and Lipstick, be sure to read more of her work here. What other misconceptions about Colombia have you been faced with? Share your experiences in the comment section below. 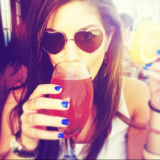 Capturing the things that inspire me: style, meals, and sites through the lens of my phone. An appetite for fashion, food, traveling and art. Leave a comment, say hello, share your site with me! Business: redwinelipstick@gmail.com