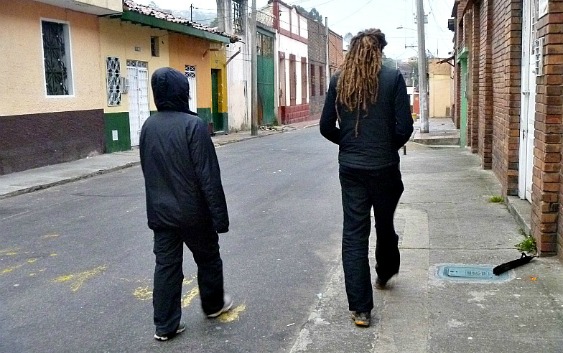 A friend of mine asked me the other day: What does Sarepa mean? Is it a website? The name of something? What is it?! Well, I want to tell you the story behind Sarepa and why the name has been following me since I began living in Colombia.

After moving to Colombia in 2012, I found myself living with a lovely British couple. We’d just finished working at a summer camp together before we all decided to look for a share house and settle into our new home in the capital, Bogota. We moved into a big old colonial-style house deep in the south of La Candelaria. Owned by an older gentleman and his son, the house had around 10 bedrooms which were lived in by various Colombians, all of whom had arrived at the house after leaving their hometowns in search of work in the capital.

There was a guy with his Spanish girlfriend from Cali, another couple from the coffee region, and a few others who weren’t home much, which didn’t leave much time for us to get to know each other, really. Each morning, my British friends and I would walk through our new suburb, past the church in the small square, down to the lane lined with houses which seemed to be constantly under construction, past the school, where children were escorted by their older siblings or parents, down to a small corner store.

Stepping inside the shop, there was a glass cabinet which stretched the length of the room, with a woman standing behind it. “A la orden,” she’d say, as we decided what to purchase. There were cheeses and meats and cleaning supplies and toilet paper stocked in the cabinets and there were even more rows behind her, stacked high with foods and cleaning products and stationary. It was a makeshift supermarket.

We’d go there almost every day and there were a few things that always made it onto the shopping list when we visited in the mornings before breakfast: a bag of eggs, an avocado, a few bars of chocolate to make chocolate caliente, milk and arepas. “We’ve got to get arepas,” I insisted to my new friends on our first visit, trying to convince them of the charms in these simple round corn disks. “What are they?” my friend Jean said, surely unawares of my exuberant appreciation. With that, I went on to describe the first time I had ever tried an arepa.

It was nothing flash, not a culinary experience to write home about or anything, but it was comforting:  Crisp after toasted over an open flame, drenched in butter and topped with quesito. So simple, but delicious. Of course, my friend laughed at my strange fascination but indulged me as we bought a couple of packets before making our way back home to toast them on the oven, while simultaneous frothing a jug of hot chocolate – three time, for the perfect flavour. And from then on, Jean began calling me Sarepa. My name is Sarah, I’m addicted to arepas. It was bound to happen really.

Have you ever been given a nickname while travelling abroad? What is it? Tell me all about it!